What are stray currents?

Stray currents can develop around electrified railway tracks powered by direct current. The rails serve as conductors for the return of current from a train to the substations. When the rail is not perfectly insulated from the ground, some of the current can discharge or “stray” into the soil below. Depending on the intensity of the current and the conductivity of the ground, stray currents can influence the corrosion rate of some metallic objects adjacent to and beneath the tracks.

Why is the use of MSE walls in the vicinity of electrified rail sometimes scrutinized?

MSE walls are built using select backfill, soil reinforcements, and facing. Soil reinforcements for large structures and public transportation projects are often galvanized steel, in the form of discrete strips or welded bar mats. The design of MSE walls include a service life that is partially determined by the corrosion rate of the galvanized steel soil reinforcements buried in the backfill, which is carefully tested to ensure that it adheres to a list of specifications including electrochemical guidelines. In the early days of modern MSE walls, a question was raised as to whether commuter rail stray currents might increase the corrosion rate of MSE wall soil reinforcements, thus reducing the expected service life of the structure.

What was the verdict?

After comprehensive review by corrosion experts, galvanized steel reinforcing strips have continued to be recommended for use in retaining structures in conjunction with direct current traction powered rail systems worldwide. These structures include walls adjacent to and supporting railway lines.

Stray currents do not cause increased corrosion in a galvanized steel strip reinforced MSE structure because the discrete metallic reinforcement in the wall system lacks electrical continuity. The reinforcements act as individual short length conductors rather than part of a network. This means that there is no tendency for stray currents to collect, accumulate and discharge to the earth at remote locations.

Evidence against corrosion from stray current development in steel-reinforced MSE walls was presented in a 1999 publication (Volume 1675, Issue 1) of the Transportation Research Record, the Journal of the Transportation Research Board (TRB). The publication included a technical paper titled, the Effects of Stray Currents on Performance of Metallic Reinforcements in Reinforced Earth Structures (John E. Sankey and Peter L. Anderson).

The paper provides a background of corrosion considerations for Reinforced Earth MSE walls and how stray currents are transferred through the MSE wall volume from a rail transit system. 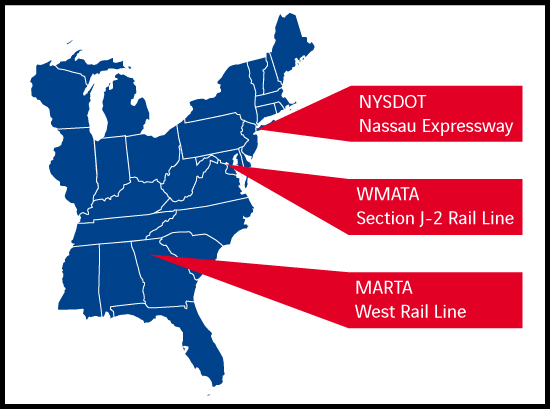 All three studies concluded that stray currents are not a concern for MSE walls constructed with discrete galvanized steel soil reinforcements, based on these major factors:

Worldwide, railway administrations and their corrosion consultants have recommended the use of MSE walls with galvanized steel reinforcements for such applications primarily because they have concluded that stray current corrosion has a negligible effect on the service life of the structure.

Since discrete steel MSE reinforcing strips are not continuously connected in a direction parallel to the source of stray currents, additional corrosion control methods are unnecessary. If the MSE wall supplier and builder follows standard practice for design, materials, construction, and drainage measures, there is no concern that stray currents from commuter rail systems will have a negative influence on the corrosion of discrete steel soil reinforcements.