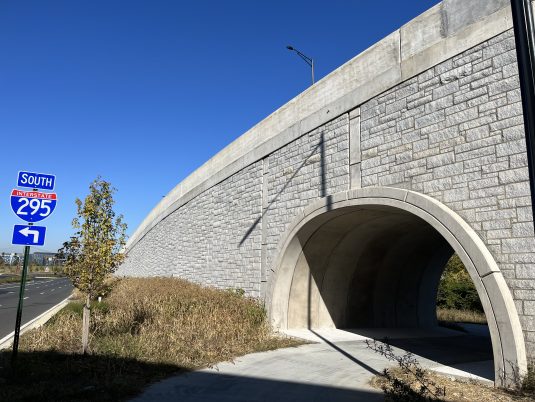 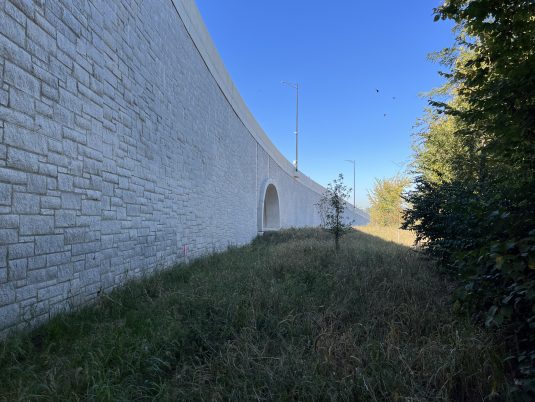 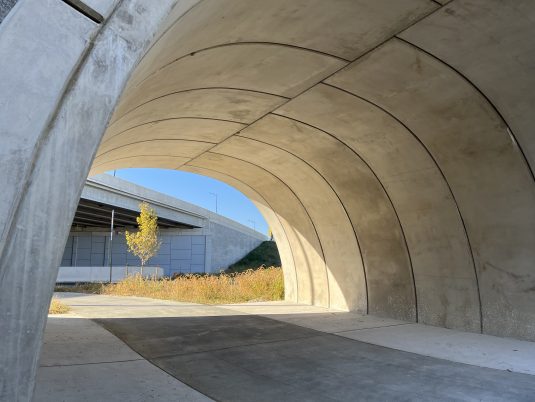 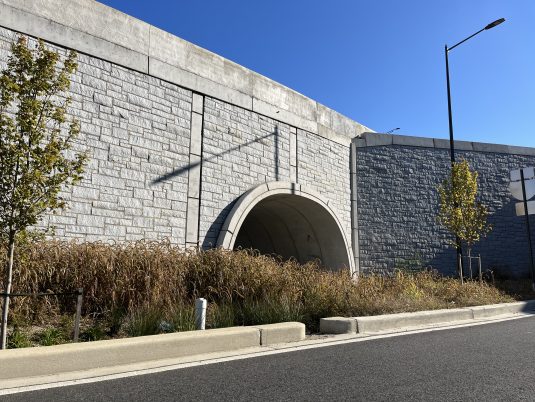 The South Capitol Street Corridor Design-Build Project is ongoing in Washington, DC. It involves the replacement of the Frederick Douglass Memorial Bridge over the Anacostia River, as well as enhanced surrounding infrastructure for traffic and pedestrians.

On the south side of the river, the I-295 and Suitland Parkway interchange has seen major upgrades with new roadway embankments, bridges, and ramps. Near the beginning of the project, RECo designed and supplied Reinforced Earth® Mechanically Stabilized Earth (MSE) retaining walls and a TechSpan® concrete arch. The arch provided more walkability to the area, as a pedestrian tunnel through one of the new MSE highway embankments. It is one part of a larger pedestrian-friendly plan for the project, and now helps to enable safe access between the surrounding area and the new bridge.

Architecturally, some of the MSE walls were designed with a stone pattern to mimic existing structures in the area. However, rather than casting the concrete MSE panels with the stone pattern, the finish was created by using dove-tail slots in the facing panels to anchor a stone masonry veneer.

A challenge on the project was how to deal with the soft foundation soils, which can include highly variable fill material in urban areas like Washington, DC. MSE walls are exceptional at accommodating weak foundation soils, however, in some cases the ground is either too soft to support the MSE wall or the associated settlement period for the new wall would be too long. Ensuring minimal post-construction settlement was also key to the constructability of the stone veneer.

To resolve the problem, a ground improvement technique was implemented by Menard USA to improve the soil in two areas of the site. Controlled Modulus Columns (CMCs)® were installed prior to the construction of the MSE walls. The ground improvement eliminated the settlement period and prevented the need for RECo to design the MSE walls with special settlement considerations.

Given the criteria of the stone masonry architectural treatment and soft foundation soils, constructing Reinforced Earth walls atop CMCs proved to be the ideal solution for the contractors to maintain construction schedule and appearance of the final product.