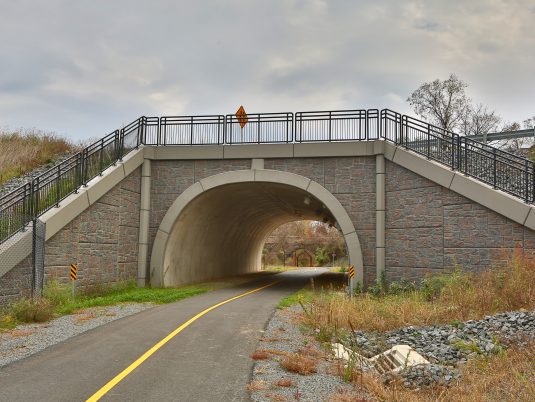 In 2015, the Virginia Department of Transportation (VDOT) widened Route 7 from Leesburg’s West Market Street to Route 9, a major commuter corridor to and from the Washington, DC suburbs. The most impactful improvements were the addition of a climbing lane to relieve westbound congestion due to heavy and slow-moving trucks ascending the steep grade, as well as expansion of the interchange at Route 9 by adding a pair of roundabouts at the tops of the ramps. Both improvements significantly upgraded safety and eased traffic flow in this corridor.

Both improvements significantly upgraded safety and eased traffic flow in this corridor.

Another significant necessity was the relocation of the W&OD bike and pedestrian trail through the Route 9 interchange, and the addition of a tunnel to reduce conflicts between trail users and vehicles. This portion of the trail on the former right of way of the Washington and Old Dominion Railroad passes through Clarke’s Gap, which was cut in the mid-1800’s to accommodate a road, and later, the railroad. The new trail relocation used a TechSpan® precast arch with Reinforced Earth® head and wing walls.