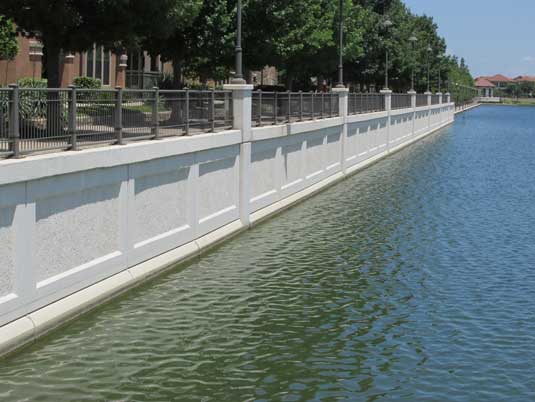 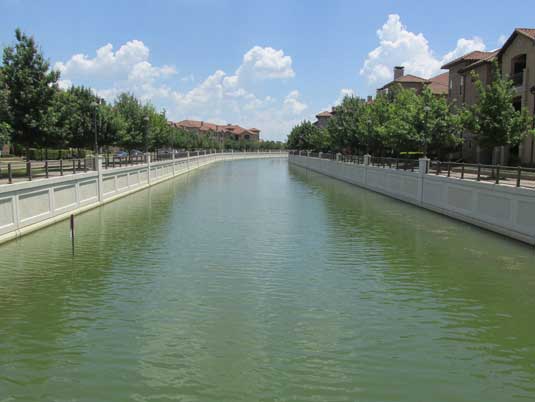 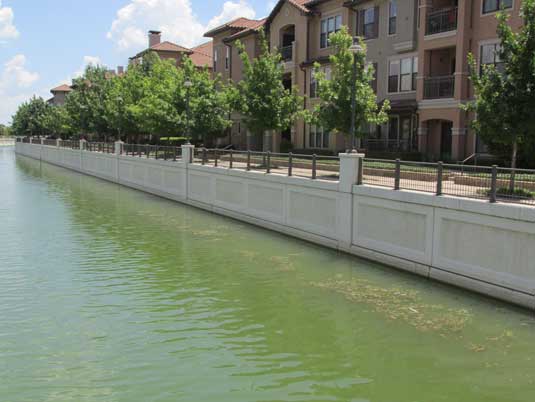 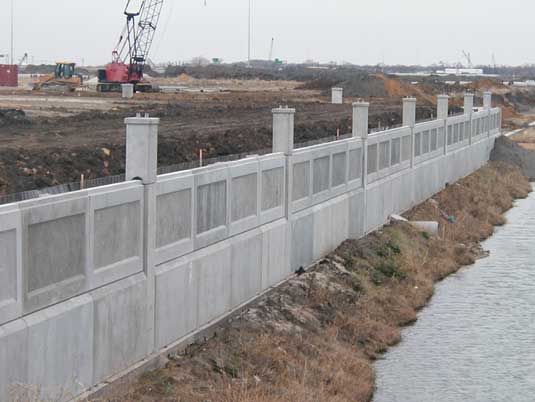 La Villita Apartments and Homes surrounds a lake and meandering waterways. The homes had to be protected from both the normal water level and periodic flooding of the lake and waterways, which ultimately flow into the Elm Fork of the Trinity River, requiring installation of retaining walls along the waterways. These walls became central aesthetic features of the community, creating the need for a low key but distinctive look.

The lower panels had smooth faces, while upper panels had a central rectangular inset where the concrete surface had a stucco form liner finish, adding to the distinctive appearance of the completed walls and the La Villita community.

While the geotechnical design requirements were established by Rone Engineering (Dallas) the scope of RECo’s design included the analysis of a variety of loading conditions. Although the pedestrian promenade along the walls imposed little load, the MSE design was required to consider the influence of building surcharge loading which began 26 feet back from the wall face. The walls also had to be designed for three different conditions related to the waterways – dry during construction, saturated at normal pool conditions (water at mid-height of the wall), and 100-year flood, with water within 1 ft. of the top of wall. The design also had to address a 3 ft. drawdown condition, in which the water level in front of the wall is assumed to be 3 feet below the backfill saturation level, producing an unbalanced hydrostatic head. This saturation/drawdown condition was evaluated at all elevations below the 100 year flood level to ensure wall stability under all conditions.

Pedestrian railing was attached to the coping and supported by a cast-in-place moment slab. As part of the overall aesthetic character of the community, a number of planting wells were located approximately 10 ft. behind the wall. Not only did Carter & Burgess specify a commercial root barrier system to a depth of 3 feet to contain the plantable soil and prevent root intrusion through the wall facings, but they also specified a supplemental lateral force on the walls as a result of this root system. To accommodate the plantings, RECo designed the upper reinforcing strips to be gradually deflected downward to go below the planting wells.