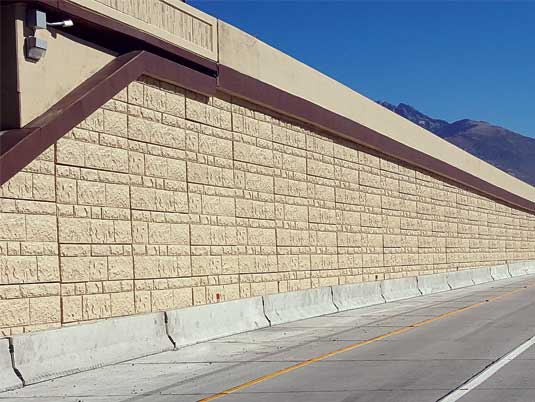 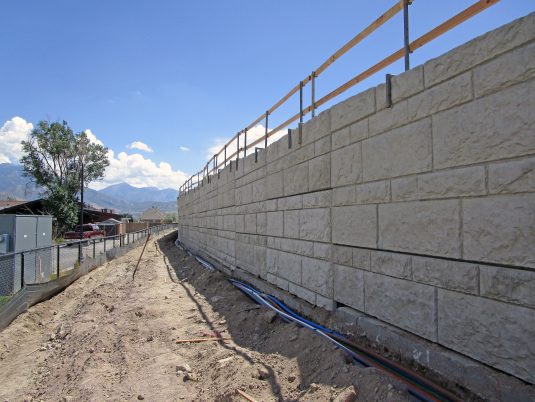 Utah DOT (UDOT) required a single point urban interchange, with seismic design requirements of 0.66g for walls within 50 feet of the abutments and 0.43g for walls elsewhere, and suggested a 250-foot long bridge taking Bangerter over Redwood. The project, advertised in early 2014 as design-build, was to be awarded based on price + time scoring and specifically required maintaining all existing traffic lanes and movements.

The winning bidder proposed a 350-foot long, 3-span continuous bridge due to its relatively shallower depth, resulting in shorter abutments and lower approach fill embankments on this settlement-prone site.

The settlement-prone foundation soils significantly influenced geotechnical design of this project. Although the lower-height abutments and approach fills somewhat reduced the expected foundation loading, additional settlement had to occur to ensure the embankment’s long term stability. Preloading and using wick drains was not a viable solution because there was neither space for the necessary preload embankments nor time to wait for the settlement to occur. The designers opted to specify an undercut and use lightweight cellular concrete fill (LCF) to produce less settlement. RECo designed the MSE walls to accommodate the lightweight fill, which had a unit weight of only 32 pcf. Normal weight soil was used in the upper sections of the MSE volume once the overall weight of the structure was within the specifications.

Sufficient weight reduction could be achieved by using cellular concrete from the bottom of the required undercut (which varied in thickness) up to just below the tops of the traffic barriers that would be constructed in front of the walls. The TerraTrel® wire mesh MSE wall system was used behind the barriers, reducing the overall facing cost and gave the contractor flexibility in locating the multiple layers of reinforcing strips which would run through the cellular concrete. The leveling pad for the precast panel facing would then sit atop the LCF and only the panel portion of the wall would be visible above the traffic barrier. As expressed by RECo’s Western Division Engineering Manager, “The design for the bottom of the wall was challenging because each wall’s foundation elevation had numerous steps, the thickness of cellular concrete necessary for reduced bearing pressure varied with the height of each wall, and we had to be sure the wire mesh facing was not exposed. We also had to keep in mind that the cold joints in the cellular concrete could not coincide with the reinforcing strip levels. This was not easy given all the foundation steps and the frequently changing elevations of the strip levels along the bottom of the wall.”

The process of constructing the cellular concrete portion of the walls had its own challenges. The several layers of reinforcing strips – that would be embedded in the LCF at different elevations along the length of the walls – had to be connected and held in position in above ground while LCF was placed and cured. To position these strips, the contractor drove vertical rebar stakes approximately 4 feet apart parallel to the strips’ alignment. Horizontal crossbars, parallel to the wall face, were tied to the vertical stakes to support the strips in an essentially horizontal position. Lift thickness of the LCF mixture varied, but every layer of reinforcing strips had to have a minimum amount of LCF both above and below, to avoid strips being in or near a cellular concrete cold joint.

Two walls along the north side of the project were required early in the job as part of the maintenance of traffic plan. Originally conceived by the contractor as two-stage walls, RECo’s ability to use the LCF and build these walls in one continuous process saved time. These first MSE walls were designed and delivered in only 8 weeks, allowing Wadsworth to get farther into the project sooner, with temporary traffic detours ready before winter.